Marius Vetrici launched WP Riders three years ago. His agency helps small businesses establish their online presence and drive their business to success. He does this by designing custom WordPress websites for them. Part of his work involves creating and maintaining custom WordPress websites. As part of his website development and maintenance business, he needed to ensure his client websites were backed up and secure. Marius and his team were looking for a backup tool that meets their needs for a long time. After making several disappointing investments in many paid tools, Marius came across BlogVault. In BlogVault, he not only found a good backup service but a trustworthy partner who helps WP Riders grow rapidly. 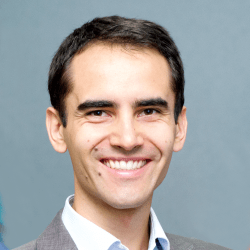 “While working on the client site we keep the site on BV in order to maintain the security and integrity of the site.”

Marius met Akshat, founder of BlogVault, at a WordCamp a few years ago. They had a lengthy discussion on the difficulties his agency was facing to find a good backup solution. He saw the value BlogVault could bring to his agency, WP Riders. Marius immediately knew he wanted to give BlogVault a try.

With the help of BlogVault, his team had to spend less time on backing up the websites and transferring them on local computers as the whole process became fast and automated. They could start working on the client’s site sooner than they did before. With faster output, WP Riders were able to empower more and more online businesses to succeed.

As a business owner working with multiple clients, one of the main issues that Marius struggled with was checking the source of a problem. With some problems, it was hard to tell what caused it – the changes his team made to the website or a pre-existing issue that the client was unaware of? “If there is an issue that stems even before we began working on the website, it’s very difficult to check the reality. Was this a real issue existing before the site came to use or did we accidentally cause it?” Marius explains.

In such cases, Marius and his team use BlogVault’s one-click backup restore feature to roll back to an untouched version of the site to check the cause of the problem. With the versioning feature, it was easy to explain to clients exactly when the issue was observed. If it’s a preexisting issue, they inform the client. But if the issue cropped up when the site was handled by WP Riders, they would restore various versions of the backups to find out what went wrong, in hopes of coming up with a solution.

“We might make mistakes … or the client might break his own site. To have clarity in these situations, we use BlogVault.”

Came for Backups and Stayed for Much More

Marius sees the benefits of using all other features of BlogVault Backup Service. “We use pretty much all BlogVault features,” he said. Before handing over the work to the client, his team presents their work on BlogVault’s free staging environment. “If the client is happy with the work on the staging site and he gives us the final green light, only then do WP Riders apply changes to the live site.”

WP Riders are regular users of Local by Flywheel and were delighted to discover a handy trick that helped them fast-track their process. “As part of our regular workflow we download the BlogVault backup and, here’s the trick –  we import it to Local by Flywheel. This works out of the box by just dragging and dropping the BlogVault zip on top of the Local window this is really cool and undocumented. Even Flywheel does not know about this, I’ve talked to them at WCEU 2018 and they were quite surprised.”

Clients love it when there’s a good value-add to their business. Besides website development, Marius also runs website maintenance and management for several clients. And adds that BlogVault’s security feature is very handy in providing just that. “All of the above examples are for custom development projects. But we do also run ongoing site maintenance projects. If after installing BlogVault on the website we notice the site is infected we do notify the client about this,” informed Marius.

“I was fortunate to meet Akshat at WordCamp Vienna….And then we signed up right away. We are a big fan ever since.”

Automated workflows that ensure everything you need is only a click away.

When your site crashes, our multiple off-site backups have your back.

An Agile & Responsive Customer Support that caters to Everyone Equally.